The Twin Cities Pioneer Press reported Thursday Nov 1, 2012 that a 57 year old grandmother and her 13 year old grandson were stabbed to death on Minneapolis’ north side Monday October 29, 2012 by what police think was a samurai sword. 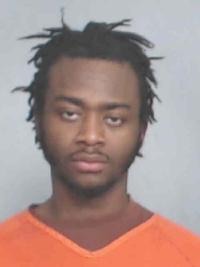 Oct. 30, 2012 courtesy photo of Ishmael Wilson Roberts. Roberts, sought in a double homicide in Minneapolis was arrested after crashing a car belonging to one of the victims, Iowa police say. Waterloo police are holding Ishmael Roberts, 22, on six charges, including second-degree theft, public intoxication, reckless driving and harassing officers, according to a criminal complaint filed Tuesday, Oct. 30, 2012 in Black Hawk County Court. Beatrice Wilson, 57, and her teenage grandson were found stabbed early Monday in Roberts’ North Minneapolis home in the 1200 block of 10th Avenue North. Photo courtesy of the Black Hawk County Sheriff.

22 year old Ishmael Roberts has been charged with 2 counts of 2nd degree murder in the double homicide. Roberts was apprehended in Iowa on Monday. The sword however was not found and police believe he discarded the sword somewhere between the twin cities and where he was taken into custody in Waterloo Iowa.

For more details see the complete article at http://www.twincities.com/localnews/ci_21907333/minneapolis-slain-woman-grandson-idd

Please keep in mind that this is not the fault of the samurai sword but rather the person who weilded it. Swords and knives are tools just like any other tool. A hammer can be used to build a house or to hit someone in the head. The tool has no idea how it is being used. It is the intent of the person controlling the tool that determines if it’s use is good or bad.