The Holy Steel to Drive Vampires to Extinction

While deemed to be fictional creatures of the dark, certain cultures do suggest that these blood suckers do indeed exist. Over the ages, many instances of vampiric entities have been seen and recorded. The areas from where the frequent legends came from belong to the Balkans and the Eastern Europe. While even folklores have suggested a wide range of appearances of the blood sucking creatures, it has been Bram Stoker’s novel in 1897 that came by the name of Dracula, the king of Vampires that proves the basis for modern vampire characters.

Whatever it is, when there is a villain, there must be a hero to save society, and when we are talking of evil blood sucking creatures of the night, there is something more that the hero needs to be equipped with other than the courage to fight back.

All of us are aware of the fact that you cannot simply kill a vamp with bullets or other ordinary weapons. It is only crucifixes and holy swords and knives that can pierce their hearts and sent them to permanent extinction. Since they are faster and stronger than humans and equipped with sharper senses, identifying a vampire is only the first step. Knowledge of how to use specific weapons and fighting skills will be needed to finish the job. Here are the weapons that no vampire hunter will miss in his/her kit.

Ultraviolet had vowed with her life to send the vampires to extinction. Vampires can and will recover fast but Violet’s machete/samurai sword will bring them down long enough for you to proceed with a swift decapitation. However, there isn’t a chance that an ordinary human being will be capable to piercing the dark heart of a blood sucker. It is the courage and skills of Violet that will be the real challenge. 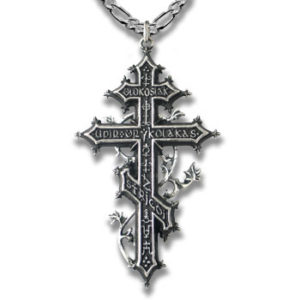 Hollywood has suggested time and often that Crucifixes have been enough to repel and defeat vampires and for that matter a pair of hunting knives held in the shape of a cross is enough for the attack. However, it isn’t necessarily so! Balkan Revenant’s Cross is a Greek orthodox cross that even the mightiest of vampires will shrink in fear from.

To match the vampire’s superior speed, you need to be agile like a vampire. There are rarely weapons like the Night Stalker Fantasy Knife that contribute to the cause. The grip ensures that the weapon becomes a part of your body while the wind blades and metal claws will be feared by the suckers. Light and strong, these blades will pierce immortality.

Dracula’s own Castle Dagger  is one of the few weapons that can actually hurt a vampire. The bat wings make it fly through the air using the vampires’ own powers against them.

Product Review of Orcrist – The Sword of Thorin Oakenshield