The Magical Weapons of Middle Earth

Hobbits had inhabited Middle Earth for millenia and cared little for the affairs of men, elves, dwarves and wizards. They had a general dislike of anything that seemed like an adventure. The Lord of the Rings trilogy, however, exposed us to the lovable characters Frodo Baggins, Samwise Gamgee, Meriadoc Brandybuck and Peregrin Took who risked their lives and fought for its protection. The story of how the One Ring was found, the story of Bilbo Baggins and his quest to Erebor with the dwarves has finally been brought to the big screen after countless years of waiting. Here is a sneak-peak into the blades that protected The Shire and Bree of Middle Earth.

The dwarf prince Thorin Oakenshield may have thrown away Orcrist, had he not been told of the blade’s greatness. Made by great elven warriors in the time of the Westernesse the sword was wielded by the leader of the dwarven clan and was buried with him in Erabor.

The cleaving edge was the nightmare of the goblin kind and this is also the reason that the sword got a nickname of “Goblin Cleaver”.

The Orcrist Movie Sword Replica recreates the look of a polished dragon fang and is superbly light, balanced and hardy. Further providing flexibility, the razor sharp blade will cut almost anything in its way, not just the orcs and goblins.

The Staff of Gandalf 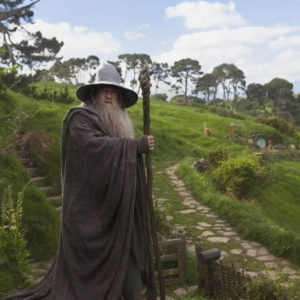 Wielded by one of the most powerful wizards in Middle Earth, the Staff of Gandalf isn’t just a walking stick.

Gandalf could conjure up his inner power and direct it straight at his enemies!

He could use it to split rocks, start fires, provide light, or give it a good swing and take out dozens in one blow.

You to can have this staff and conjure up your own inner power.

Glamdring – the Sword of Gandalf 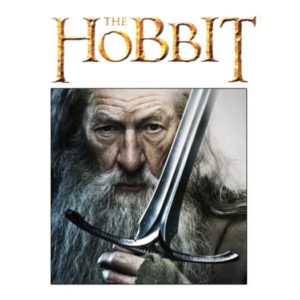 If Gandalf’s magical staff isn’t enough for you then maybe you prefer Glamdring. The sacred weapon of the mighty wizard, Glamdring was the creation of the high elves from the West.

Glamdring had been lost for a thousand years before it was found with Orcrist and Sting by Bilbo and the Dwarves in the troll lair in Rhûdaur. No record has ever been found telling how it came to be in the Trolls possession.

The blade was used to defeat the evil forces of the Goblins in The Misty Mountains and to protect the Fellowship of The Ring in their efforts to destroy the One Ring.

The sword remained on Gandalf’s side when he sailed to the west with the other elves and Great Ring Bearers Elrond, Galdriel and Frodo.

Sting – the Sword of Bilbo Baggins 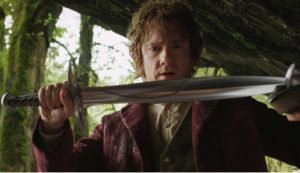 Bilbo’s sword was really more a knife or dagger but for someone barely 3 feet tall it was perfect for use as a sword. It was found with Orcrist and Glamdring in the trolls lair. After Bilbo’s fight in Mirkwood with the spiders he proclaimed. “I shall name you Sting.”

Like Orcrist and Glamdring this is a special elven sword and glows blue when Goblins or Orcs draw near. Should you ever awaken to a blue glow you can grab Sting and embrace it’s amazing power.

The wielder of Sting can display cunning and confidence using this unique and awesome movie replica.

For these and even more movie sword replicas. Head on over to Excalibur Brothers.com

Four Hard To Get Cold Steel Items Have Arrived