Staff Of Gandalf from The Hobbit Now Available 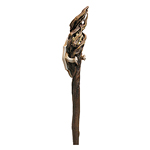 The Staff of Gandalf from the movie The Hobbit: An Unexected Journey is now available.

The classic book by J.R.R. Tolkein has been adapted into a 3 part movie series from New Line Productions and is directed by Peter Jackson director of “The Lord of The Rings” trilogy.

Gandalf’s staff is more than just a walking stick. It is a source of ancient power in Middle Earth and has the power to split rock, provide light and even start fires.

This is an officially licensed version, meticulously recreated from the original movie prop and produced by United Cutlery a leader in fine movie replicas.