Chinese Swords: Everything You Need to Know

Chinese swords are beautiful and elegant weapons. While many sword enthusiasts would collect such a sword for decorative purposes, that is not the sole case. Like with many swords, practicing Chinese sword fighting is an art form that has been around for centuries.

These swords are one of the most popular types in the world. They come in many different styles, shapes, and sizes.

These weapons were used in warfare, ceremonial events, and even personal duels across history. From the Song Dynasty to the Qing Dynasty, Chinese sword design evolved into different styles that ranged from slender blades with pointed tips to heavy blades with round ends meant for cutting through armor.

With so much history and meaning behind the Chinese sword, it is important to know everything you can about these weapons before making a purchase. This article will give you all the information you need to make an informed decision when buying your next sword.

The History of Chinese Swords


Chinese swords have been around since at least 600 BC when they were first forged during the Zhou Dynasty (1046 BC-256 BC).

There’s no exact date on when exactly they were invented but it is known that early versions of them had blades made out of bronze or copper which gave way to steel by the Han Dynasty (206 BC – 220 AD) because these metals were stronger than what was available before then.

The earliest recorded use of these sword dates back to the Chinese Warring States period (476 BC-221 BC) where different Chinese states would battle each other with these types of swords.

Chinese blades were first forged out of bronze and copper, but their use quickly evolved throughout history as they got stronger. Coming into existence during the Zhou Dynasty, Chinese swords changed through time before reaching new heights after the Han Dynasty when their design was perfected.

They were used in warfare to great effect so it’s no surprise that Chinese soldiers still use them today. The last recorded usage of a Chinese sword was during China’s Second Sino-Japanese War which occurred from 1937-1945.

The swords were still used throughout the war but Chinese sabers proved to be more efficient because of their unique design which made it easier for them to cut through enemy armor as well as Chinese shields.

Chinese sword use continues today in Chinese martial arts, as a weapon of choice for some Chinese soldiers as well as as a ceremonial weapon for those who practice Chinese ceremonies such as weddings and funerals.

The Parts of a Chinese Sword


There are three main parts you should know about when buying a Chinese sword: the blade, the hilt, and the scabbard.

Chinese swords have long blades that give them their characteristic look. These blades can range from thin to thick so it’s important to know beforehand what you want in your Chinese sword.

The last one is Guan Dao Chinese swords which are basically Chinese Daos with wider ends and on poles. This last type is meant for cutting through enemy armor rather than just stabbing them with a narrow tip.

The scabbard is where Chinese swords go after they’ve been used and sits on the left side of a soldier and his belt wraps around it horizontally and vertically to ensure that it stays put throughout battle. This also prevents the blade from being exposed and maintaining its sharpness for when it will be used again.

The Advantage of Chinese Swords


The Chinese sword is unique because it doesn’t have a weak point like other swords. Chinese swords are designed to be strong on both the tip and hilt so that it can last for years without breaking or being damaged easily.

Chinese blades also aren’t too short where they become ineffective on the battlefield, but not too long either where soldiers would have trouble wielding them efficiently enough to slice through heavy armor during battle.

They are effective in its length which makes it ideal for combat throughout Chinese history as it gets adopted by many civilizations over time.

Other great things about Chinese swords are how light they are, how sharp their blades, and how easy they are to wield even with one hand (though you’d need two hands for maximum effectiveness). All around, Chinese swords are an excellent weapon to have in your possession.

History and a Cultural Symbol in a Blade


Chinese swords are an ancient weapon with a rich history. These weapons have been used for thousands of years by warriors in various wars and battles, but they continue to serve as an important cultural symbol today.

Purchasing a Chinese sword has many uses. It can stand as a beautiful decorative piece for your home. At the same time, it is still a viable form of exercise and martial arts.

Whatever your reason for buying one, we hope the information we have presented will help you decide on whether you want to purchase a Chinese sword.

You might also wanna check A GUIDE TO NINJA SWORDS. 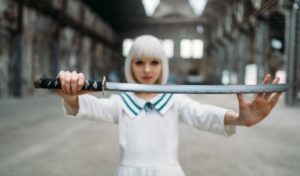